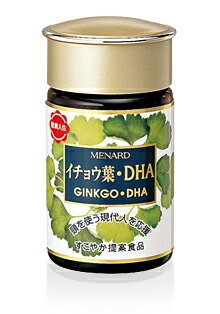 Menard Ginkgo & DHA Ginkgo Biloba Extract + DHA - a drug for brain activity and for maintaining the mental abilities of the brain.

The composition of the drug includes 2 types active components:

OF the so-called docosahexaenoic acid( DHA), omega-3 fatty acids are useful for cerebral circulation and is an integral part of the nerve cells of the brain, contributes to its proper development.

This polyunsaturated acid is almost the most valuable for health. The acid belongs to the Omega-3 group, it is one of the main components of the brain, which is part of its gray matter, as well as the eye retina, sperm, testicles and cell membranes.

OF - an essential acid, and it is not produced independently in the body. The only way to get DHA is to eat foods in which DHA is contained in high concentrations, and these are marine fish belonging to fatty breeds.

Ginkgo Biloba Extract – this is a plant common in Japan and in southeast Asia. The tree is one of the most ancient and beautiful in the world.

In the medicine of the East, this plant is known as the most effective in improving the activity of the brain, the central nervous system, have a pronounced antioxidant activity and improve the transfer of oxygen to tissues.

Ginkgo biloba is the only plant containing ginkgolides-substances that can increase the elasticity and strength of the walls of blood vessels of the brain and improve blood supply to the brain, which improves memory, hearing, speech, vision, motor functions.

It reduces the level of cholesterol in the blood, normalizes blood pressure, reduces dizziness, headaches, tinnitus.

Ginkgo biloba relieves age-related problems, in particular, from such a problem as memory impairment.

It improves cerebral and peripheral blood circulation, increases the consumption of oxygen and glucose by the brain, stimulates brain activity, is effectively used for memory disorders, reduced speed of thinking, concentration of attention, with increased mental stress.

Contraindications: Individual intolerance to the components, during pregnancy and lactation, consultation with a doctor is mandatory.