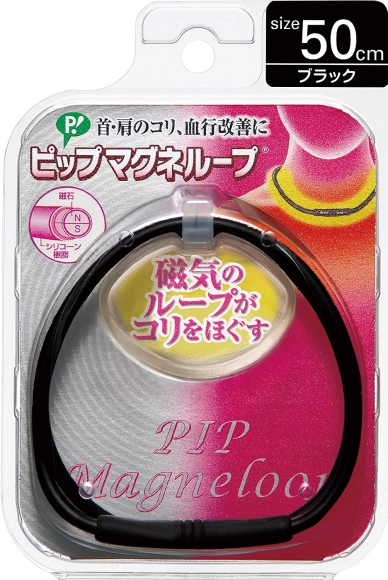 MagneLoop It is one of the most popular magnetic therapy devices in Japan. Designed by the Japanese company Fujimoto, the necklace has gained huge popularity all over the world. Magnetic Necklace PIP MAGNELOOP having a magnetic field density of 55 µT, it allows you to fully compensate for the lack of an internal human magnetic field. The MAGNELOOP magnetic necklace has both a therapeutic effect, increasing blood circulation in key acupuncture points of our body, and improves the overall condition of the physiological system of the body.

Advantages of the Magneloop magnetic necklace:

The basis of the therapeutic effect of Magneloop is a magnetic field that improves blood circulation and the condition of the body's vessels. Thus, the diversity of the use of the necklace is achieved, because the correct circulation of blood, and with it the nutrients necessary for the body, largely determines the state of all human organs, as well as the nervous system, bones and joints.

The second important component of Magneloop magnetic necklaces is the restoration of the normal magnetic polarity of cells, changed due to natural processes in human organs.

The third fundamental function of magnetic necklaces is to activate the work of all the enzyme systems of the body.

When using magnetic products, it is recommended to drink at least 3-4 glasses of water a day.

The Magneloop magnetic necklace is comfortable to use, as it is made of a pleasant waterproof silicone. You can sleep, swim, and wash in it. It will serve as a good companion of your immunity and will allow you to fight any diseases more effectively.

Be sure to consult a doctor before using the necklace in the following cases-if you are on permanent treatment, heart disease, during pregnancy and after childbirth, diabetes, skin diseases, at temperatures above 38 degrees.

Do not use simultaneously with other devices. If redness, itching, rash appear during the use of the necklace, immediately stop using the drug. Do not alter the device, do not change its shape. Keep away from children. Do not use in the sauna and at high temperature. Do not use cream and sprays when wearing a necklace.

The effect of permanent magnets on the human body cannot be considered a treatment. This is a compensatory phenomenon: magnets return to the body what it does not get from nature due to the weakening of the geomagnetic field.

Fifty years ago, a Japanese doctor Nakagaeva described a new disease that affects a huge number of people on earth, and called it "human magnetic field deficiency syndrome".

The main manifestations of the syndrome are: general weakness, increased fatigue, reduced performance, poor sleep, headaches, joint and spine pain, pathology of the cardiovascular system, hyper-and hypotension, digestive disorders, skin changes, prostate problems, gynecological dysfunctions and a number of other processes. Dr. Nakagaeva interviewed 11648 people using magnetic products and found that more than 90% of them felt a significant improvement in their condition thanks to magnetic therapy. 10% did not notice any changes, but none of the respondents mentioned any side effects. Magnetic fields improve the condition of the circulatory system of the brain and surface vessels. They stimulate the nutrition of brain tissue, primarily due to the intake of oxygen into it. In addition, the magnetic field is a powerful vascular cleaner from cholesterol and calcium deposits. Magnetic therapy is necessary, it helps to strengthen blood vessels, increase their elasticity, eliminate oxygen starvation of brain tissue. The use of magnetic therapy allows a person not only to tolerate magnetic storms much easier, but in fact, this problem ceases to be a problem for a person.

The blood circulation in the body increases, which has a positive effect on the source of pain and other ailments in the body;

Under the influence of a magnetic field, blood clots split, breaking up into smaller formations, it is easier for blood to move through the vessels, respectively, to perform its function;

Blood pressure is regulated and stabilized;

Improves the quality of sleep;

Improves and regulates the work of the digestive system;

The state of the cardiovascular system is corrected;

Increases immunity, efficiency and improves the overall condition of the body.