KAGURA complex of extracts of fucoidan, shiitake and agaricus, 240 pcs 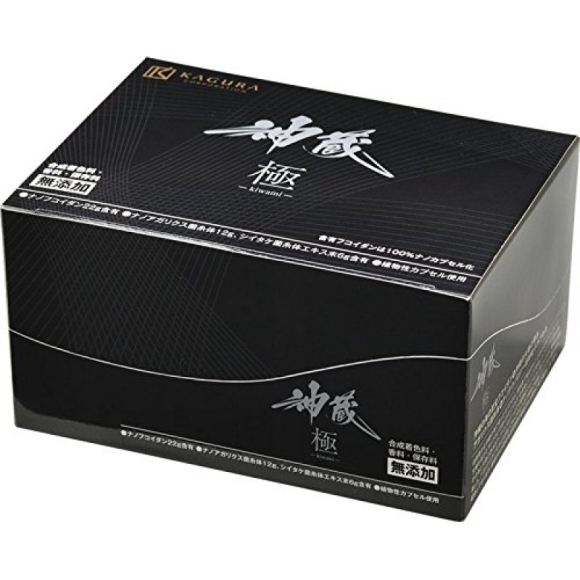 KAGURA complex of extracts of fucoidan, shiitake and agaricus - a powerful complex using nanotechnology patented by the manufacturer in the processing of extracts of nanofucoidan, agaricus mushroom and shiitake mushrooms.

The complex includes the main ingredients:

As part of 100% natural fucoidan It is obtained from the Mosuku algae grown on the island of Okinawa.

Fucoidan is a health component from the mucous component of seaweed (Phaeophyceae). Among the seaweed on Okinawa, modzuki contains a lot of fucoidan, and it is known that this is about 3-5 times more than that of other seaweed.

Thanks to the unique manufacturing technology nanofucoidan it is a super-fine-grained particle that has a digestibility by the body 10 times more effective than conventional fucoidan. The complex contains 22,200 mg of nanofucoidan.

Mycelium of the agaricus fungus it is also produced using the manufacturer's patented nanotechnology. The complex contains 12,000 mg.

This form is easily absorbed in the intestinal tract, preventing the destruction of ingredients by gastric juice or pancreatic juice. The digestibility is 5-10 times higher in comparison with ordinary agaricus. Agaricus has a high antibacterial ability, choleretic and anti-ulcer properties.

The environment for growing mycelium of agaricus and Shiitake mushrooms is the island of Okinawa, where all the company's production is located. Mycelium is cultivated in the cake of sugar cane growing under the year-round sun on the island of Okinawa. Under such growing conditions, the mycelium contains a large amount of physiologically active substances, such as lignin and hemicellulose. Other methods of cultivation do not carry so many useful substances. Agaricus mycelium is grown for 3 months, and matures for 1 month.

Shiitake mycelium, considered the most healing it matures for 4 months in sugar cane cake, its content in the preparation is 6000 mg.

Shiitake has parts called fruit bodies and mycelium. The mycelium is the part corresponding to the roots of shiitake mushrooms, which is characterized by the content of more nutrients than the usual part. Shiitake mycelium extract contains: glucan, arabinoxylan, valinic acid, sirinic acid, etc., which are characteristic components of β-glucan (polysaccharide).

The mycelium of the shiitake mushroom is used to reduce body weight, cholesterol levels in the blood, as well as to treat impotence.

It is shown that the extract from the mycelium of the fungus has protective properties during chemotherapy, significantly reducing the number of pathologically altered cells that arise under the action of antitumor drugs.

Since ancient times, shiitake has been used for diseases of the upper respiratory tract, poor blood circulation, liver diseases, exhaustion and weakness, as well as to increase vitality. It was believed that these mushrooms prevent premature aging.

Synthetic dyes, flavors and preservatives are not used in the production of the biologically active additive KAGURA complex of extracts of fucoidan, shiitake and agaricus.

It is not a medicinal product, it is necessary to consult a doctor before using it.