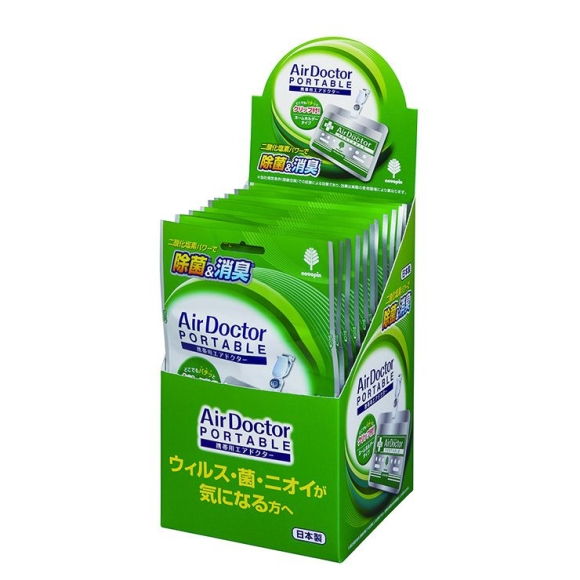 Japanese scientists have invented a special virus-blocker " Air Doctor Portable" - this is an absolutely safe tool that guarantees constant protection from viruses, bacteria, allergens and mold without drugs and harm to the immune system. Its use is absolutely safe, so it can be used even to protect infants, the elderly, weakened and often ill people.

The invention is based on a safe technology for the production of chlorine dioxide.

Chlorine Dioxide (CLO2) it oxidizes the proteins of viruses.

Today, chlorine dioxide is the most powerful antimicrobial agent in the world. It kills pathogens by oxidation, which is a completely different chemical reaction than with chlorine, which acts by chlorination. The difference between them is that oxidation does not lead to the formation of harmful compounds.

Many reputable scientists say that chlorine dioxide will become an important disinfectant and oxidizer in the world in the next 20 years.

The concentration of chlorine dioxide in the aerodoctor is 100 times lower in terms of safety than the maximum permissible hygienic standards in Russia (0.003 mg /m3), and in terms of effectiveness, it is 2.5 times more powerful than disinfection methods!

The active component of the aerodoctor is free active oxygen, which enriches the air and destroys most microorganisms by oxidation.

The effectiveness comes in 40 seconds. Valid for 30 days.

It saturates with oxygen and protects the personal air space of 1 m3 from bacteria, viruses, fungi, their spores and aeroallergens (aromas of flowering plants and pollen).

Odorless, the impact on humans is less than the impact of the environment, this is documented by studies of Japanese scientists, so it is possible to use children starting from infancy by attaching a blocker to a stroller.

The virus blocker is convenient to use due to its small size. It is hung around the neck by a string or gets caught in a pocket of clothing.

You can use it not only to avoid getting infected yourself, but also, if you are already ill, so as not to infect the children or colleagues around you!

"Air Doctor Portable" it has not only a protective effect against all known viruses, including the influenza virus transmitted by airborne droplets, but also a deodorizing effect.

do not eat: in case of contact with the stomach, consult a doctor immediately;

in case of contact with eyes, rinse immediately with plenty of water, consult a doctor;

it is not recommended to use it at high temperatures and in direct sunlight;

if there is a strong wind and the efficiency decreases outdoors, try to use the virus blocker indoors, in a room, in a car.

2 years in closed form, after opening the protective film - 1 month.