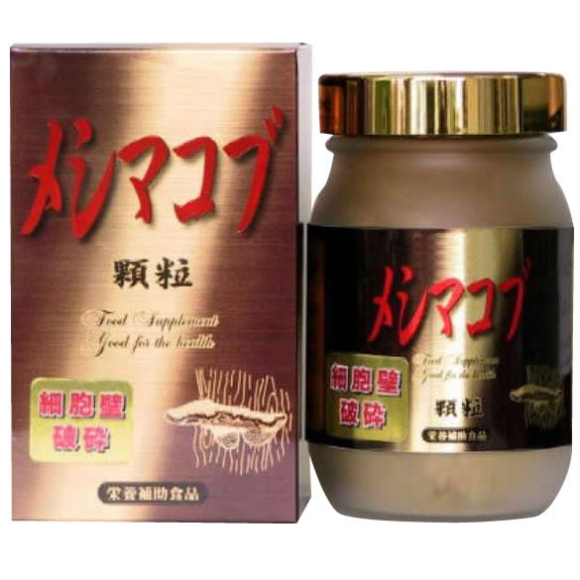 FINE Meshima Mushroom Extract Meshima (sanghwan tinder Phellinus linteus) is a unique mushroom with medicinal, healing properties that has no analogues in the world. For its useful qualities, meshim was called the "Longevity Mushroom".

The isolated extract of Phellinus linteus has an antitumor effect. The effectiveness is generally recognized and studied on an ongoing basis.

For several centuries in Asia, meshima mushroom extract has been used as a means to strengthen the immune system, slow down the aging of the body, effectively fighting cancer. Meshima mushroom is a tinder mushroom growing on mulberry trees. It got its name from the Japanese island of Meshima, where this mushroom was collected in large quantities and made without the use of additives and auxiliary substances. The mushroom is extracted in alcohol for several days, and also in water at high temperatures according to the original technology, after which the extract is granulated to a powdery consistency.

The main active ingredient of meshima mushroom extract is beta-glucans - polysaccharides that have antitumor effect, preventing not only the appearance of cancer cells, but the progression of an existing disease. This revolutionary Japanese drug supports the body during chemo and radiation therapy, facilitating recovery and enhancing the effectiveness of cancer drugs.

The Meshima mushroom has many beneficial properties for human health.

Enhances the protective properties of the body. It resists the development of diabetes mellitus, as well as diseases such as atherosclerosis and hypertension. Reduces the manifestations of allergic reactions.

It resists the development of breast cancer and prostate adenoma. Relieves the condition during radiation and chemotherapy. It starts rejuvenation, improves the condition of the skin and reduces the depth of existing wrinkles. Accelerates wound healing, activates cellular renewal

Beta-glucans. Stimulate the immune system, helping the body to fight infections on its own. Have antitumor effect, increase endurance

Meshima Mushroom Extract Power has a complex effect. It not only strengthens the body, but also resists the development of many diseases.

Storage conditions: Store in a dry, dark and inaccessible place for children, at a temperature not exceeding 25°C.

Contraindications: Individual intolerance to the components of the drug, the period of pregnancy and lactation. A doctor's consultation is recommended before use.